Interactive applications use progress bars to provide users with feedback on the progress of lengthy tasks such as downloading large files. Current graphical user interface toolkits pop up a window with the progress bar; as the operation progresses, the length of the bar increases from left to right to indicate how much of the task has been completed, and to enable users to estimate how much longer the task will take. When the task is complete, the application closes the window containing the progress bar and opens the window containing the content. But there’s a problem.

The following image show an example progress bar window. Progress is shown by decreasing the length of the bar from left to right until it disappears.

The following image show another type of progress window that shows progress by decreasing the extent of the arc of a circle anti-clockwise from 12 o’clock until it disappears. 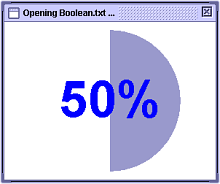 Watch this demo to see a progress window in action.