A Diagonal Layout Algorithm for Matrices

This article describes an algorithm for laying out a list of items diagonally in a square, or nearly square, matrix. The algorithm provides a method for compactly arranging sorted items using proximity and has been used to visualize document similarity data. A Java implementation of the algorithm is presented.

This article describes an algorithm for laying out a list of items diagonally in a matrix. The matrix is either square, or nearly square; the width and height of the matrix differ by at most one. If the values in the list have been sorted, this algorithm provides a method for compactly arranging the items to emphasize the order with proximity. This algorithm has been used to implement a visualisation of document similarity data.

I’ll use the following list of 12 items to explain the algorithm:

The following examples show these items laid out in square (a) and nearly square matrices (b) and (c). The head of the list is placed in the top left hand corner. The remaining items are arranged diagonally from the top left to the bottom right in the order they occur in the list. If the number of items in the list is larger than the size of the matrix, the extra values are discarded, as illustrated by (a). If the number of items is smaller than the size of the matrix, the remainder of the matrix is left empty (d).

The following code is a Java implementation of the diagonal layout algorithm. The layout() method has two parameters: an array of values to lay out, items, and a two-dimensional array, matrix, in which the values are to be laid out. To simplify the presentation of the code, the layout() method assumes that the dimensions of matrix are large enough to contain the number of items and does not perform this check. 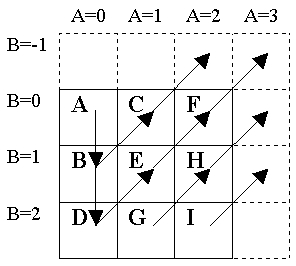 The following code calculates the dimensions of the smallest square, or nearly square matrix that will hold a specified number of items, size.