Prototyping a User Interface for the ELF Information Browser

The Electronic Learning Facilitator (ELF) project aims to develop an intelligent assistant for helping researchers locate information in the Intensely Supportive Learning Environment (ISLE) Object Store (Kirby 1995). As users browse and search for information using various tools, the ELF observes this activity and makes inferences about their interests. The ELF maintains a profile for each user derived from a history of recent interactions and the user’s stated preferences, such as his or her preferred search tools. The ELF maintains a description of the network resources in the ISLE Object Store and matches users to appropriate network resources using a set of rules captured in a knowledge-based system. The ELF must present itself unobtrusively when gathering information about users and when making suggestions to users. The following diagram illustrates how the ELF interacts with users, the ISLE Object Store and network resources such as the Internet. 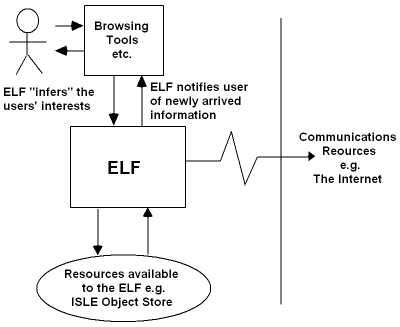 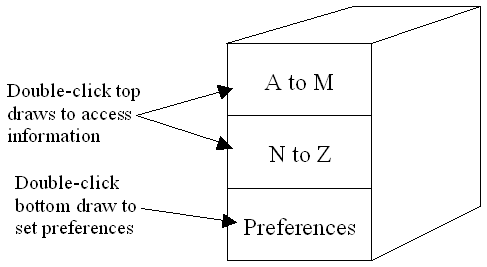 The filing cabinet user interface has three drawers. The top two drawers divide the information alphabetically into A to M and N to Z. The bottom drawer contains the user preferences for the ELF Information Browser. Users access the information in each drawer by double-clicking the draw.

The following diagram illustrates the user interface for displaying the information contained in the drawers. To carry the filing cabinet metaphor through, information is grouped by letter and presented in hanging files similar to At Ease, a front-end to the Macintosh Finder that groups applications and files into categories displayed on hanging files. 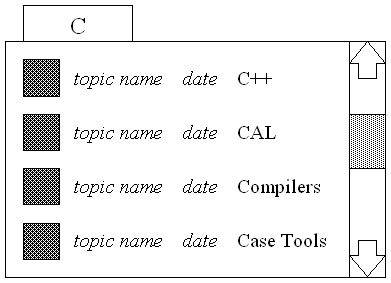 The disadvantage of the filing cabinet user interface is the limitation of alphabetization. Users would need to create new categories to organize information in a way that is meaningful to them. With potentially large amounts of information being found by the ELF, creating new categories and deciding where information should go would be a cumbersome administrative duty for users. Letting the ELF categorize incoming information seemed appealing at first but several questions soon arose, including:

The SuperBook is a structured hypertext browsing and retrieval system designed to improve the usability of conventional documents (Egan et al. 1989). The SuperBook augments regular hypertext with the following features:

The SuperBook indexes each word of the input documents and creates a large but efficient data structure. The likelihood of a user search term matching an indexed word is increased by aliasing, which lets users assign synonyms for jargon used by the authors of the documents. The SuperBook compiles search results into a book, which it presents as a table of contents with a fisheye view. Fisheye views presents detailed information at the focus of the view and presents more general information at the periphery. Users can expand each item in the table of contents to reveal more detail (the focus), leaving the other items to provide context (the periphery). The SuperBook presents pages of text found by keyword searching to the right of the table of contents. Search keywords are highlighted in the text which users can annotate with margin notes.

Egan et. al. (1989) found that the SuperBook enabled students to answer search questions more quickly and more accurately than they could with conventional texts. Students also wrote higher quality open-book essays using the SuperBook than they did with conventional texts. These results suggested that a user interface similar to the SuperBook would be suitable for the ELF Information Browser. As a SuperBook, the ELF would compile search results into a document. Users would then not have to concern themselves with categorizing the information found by the ELF because the table of contents automatically categorizes the search results. The SuperBook’s aliasing facility would also enable the ELF to locate relevant information even when information authors use different terms to ELF users when describing the same concept. 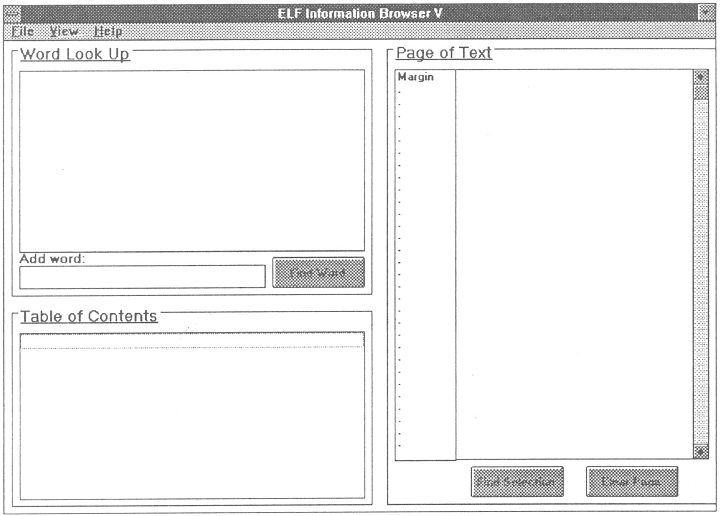 The ELF’s SuperBook user interface is composed of three areas:

The Word Look Up area contains:

The Table of Contents area displays the table of contents for the document constructed from the search results.

The Page of Text area contains:

To initiate a search, the user first adds a word to the Word Look Up list by typing a word into the Add word text input box and pressing return. The word is then added to the Word Look Up list. As soon as the user selects an item in the Word Look Up list, the Find Word button becomes enabled and when pressed, produces a table of contents. The table of contents is built from words found in the search results. The number of occurrences of each topic is presented in square brackets after the item in the list. Double-clicking an item expands the item to reveal sub-topics (the fisheye view). Double-clicking an expanded item collapses the item to hide unwanted detail. Clicking on an item with no sub-topics displays the item in the Page of Text area. In a full implementation of the SuperBook interface, clicking anywhere in the margin of the Page of Text area would enable users to add annotations. The following screenshot shows the ELF SuperBook user interface after a search for broccoli, which was one of the evaluation tasks: 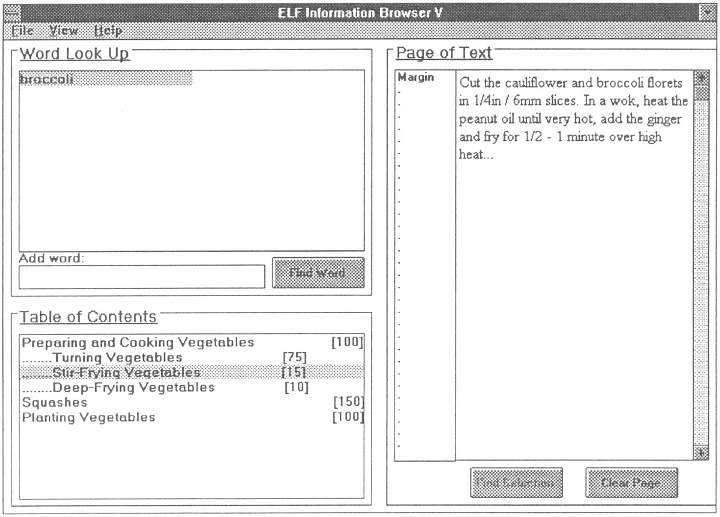 I performed a summative evaluation which focussed on searching using a keyword and the table of contents. Five participants were given a brief background to the ELF and asked to perform two tasks:

When empty, the Word Look Up list looked like a text input box and participants wanted to type directly into this area. This was because the Add word text input box was below the list and did not initially have the input focus. One participant felt that it would be more natural to start with a few words in the Word Look Up list because, as the ELF had been monitoring him, it would have a rough set of keywords to start with. This would also help differentiate an empty list from an empty text input box.

The Table of Contents area was satisfactory except that a method to distinguish expandable and non-expandable items was required. I observed that participants clicked once on an item in the table of contents rather than the expected double-click, which was probably a sign of participants’ tentative exploration of the interface. In the next version of the prototype, item expansion was invoked with a single click.

To summarize, the following changes were made to the prototype after the evaluation:

The following screenshot illustrates version six of the ELF SuperBook interface, which incorporated the above changes. Version six also incorporated online help that provided simple textual descriptions of the Word Look Up, Table of Contents and Page Of Text areas. 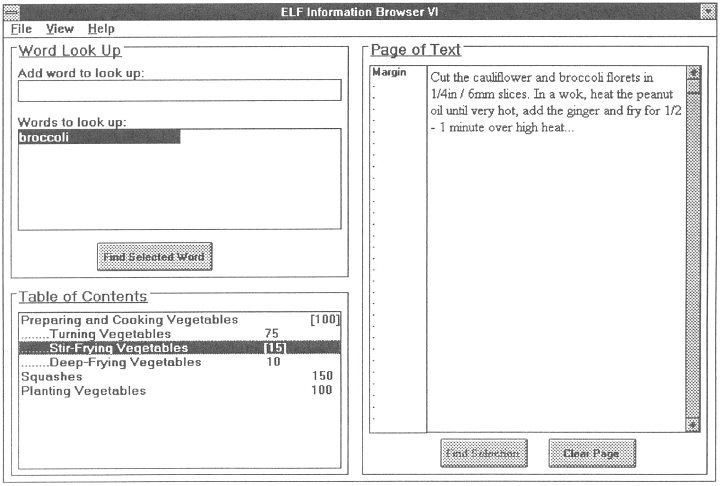 In a follow-up evaluation, five participants new to the ELF SuperBook user interface performed the same tasks under the same conditions (I provided a brief background to the ELF but no explanation of its SuperBook user interface). All participants except one were able to perform the tasks without asking for an explanation or using the help facility. The participant who did use the help facility at the very beginning did not use it after she had entered a word into the Word Look Up area. The changes made to the prototype after the first evaluation produced the right visual clues for most participants to get started and to complete the tasks.