that returns the AWT Component that will renderer the cell. The parameters of this method are supplied by a JTable object and enable the correct value to be rendered with appropriate highlighting to indicate whether the cell has focus or is highlighted.

Expansion bars inform the user about the current scale of an image but provide no control over its size. Methods of controlling expansion and contraction are described in sections 3 and 4.

The ExpandingComponentTableCellRenderer wraps a standard Java AWT Component object and scales it to fit the current cell size. The following screenshots show a numeric input component at three different scales. The slider enables the user to select a value in the range 50 to 100. A value can also be entered in the text input box which constrains the value to be within this range. The ExpandingComponentTableCellRenderer enables a Component to be scaled during the stages of animation and will likely be used with the ZoomingTableCellRenderer, described below.

The value of a table cell is edited by first clicking on the cell to display the component that renders the cell editor (Geary 1999). The user edits the value of the cell with this component and a final click indicates that editing is complete. The component used to display a table cell value is usually the same as the component used to edit it. The default table cell editor is a text field. A more complex component is often required to constrain input values for example, and to provide feedback on the progress of editing the cell. If the component above was used to display each value in a table, the table would be very large. The ExpandingComponentTableCellRenderer can be used to minimize the space required for cell value editors by hiding them until needed.

The following screenshots show a small table of nine numeric values that must be constrained to be between 50 and 100 (a). This table is fitted with the ExpandingComponentTableCellRenderer that renders the editor component shown above. When the user clicks on a cell to edit it, the textual value is replaced with the editor component scaled to fit in the cell (b). The expansion of the component is then smoothly animated until it reaches full size when the user can then edit the value (c) and (d). When the value has been edited, the editor component is smoothly contracted to the original size of the cell and is replaced by a textual representation of the new value.

The ZoomingTableCellRenderer enables expanding table cells to be rendered at different levels of detail. The current size of the cell is the usual criteria for selecting a level of detail, but any criteria can be used and is application specific.

The following diagram shows the classes and interfaces of the Expanding Table. 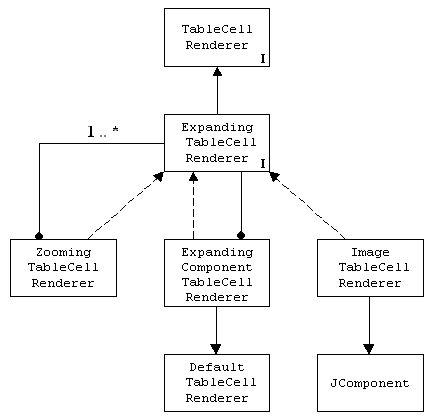 The ExpandingTable class provides the building blocks for implementing the user interaction required for expanding and contracting table cells, such as clicking on a cell to expand and contract it. The following code fragment shows how expansion invoked by a mouse click would be implemented using methods of the JTable and ExpandingTable classes. The TableMouseListener class is a MouseInputAdaptor that responds to mouse click events when the mouse is over the table. The row and column co-ordinates of the cell in which the mouse was clicked are established. The cell is then expanded if the left mouse button was clicked, or contracted if one of the other mouse buttons was clicked.

Cells can be expanded and contracted immediately or with smooth animation, and is selected by calling the void setAnimateExpansion(boolean animateExpansion) method. When the expansion and contraction is animated, the size of the cell is smoothly animated from the current size to the desired size by interpolating intermediate sizes. The animation is produced by a time-based algorithm that must complete the animation in a specified maximum amount of time. Faster machines will be able to complete more interpolated steps in the same amount of time which will produce smoother animation than slower machines.

The following code fragment shows the algorithm that smoothly animates the size of a cell by interpolating values between its contracted and expanded sizes. While the allotted duration has not elapsed, the next interpolated width and height of the cell (w, h) is calculated. The size of the cell is set to (w, h) with a call to the method void setCellSize(int row, int column, int width, int height).

The time taken to animate the expansion and contraction of a cell can be different and is set with calls to void setExpansionDuration(long duration) and void setContractionDuration(long duration). Cell expansion will usually be set to take longer than contraction. A slower expansion enables the user to maintain their awareness of the context of the expanding cell and avoid disorientation. Cells can be contracted faster because the user has completed his or her task with a cell.

Columns are the primary organising structure in JTable objects. The Expanding Table increases the importance of rows by enabling users to increase and decrease the size of one or all of the rows with the mouse, and by providing fisheye views of the rows.

Diagram (a) below illustrates single row expansion: one row is expanded and the other rows are held constant. Diagram (b) shows all rows expanded by the same amount.

Rows can also be expanded with the fisheye transformation described in the next section.

The Expanding Table provides fisheye views of the rows and cells. Fisheye lenses are an established visualization technique that enlarge the information at the focus of the lens and reduce the size of the information towards the periphery (Sarkar and Brown, 1992).

The following screenshot shows the Expanding Calendar application for 2002. The first column shows the months and the rows of this column span the weeks of each month. The next column shows the 52 weeks of the year. The remaining columns show the days of the week. 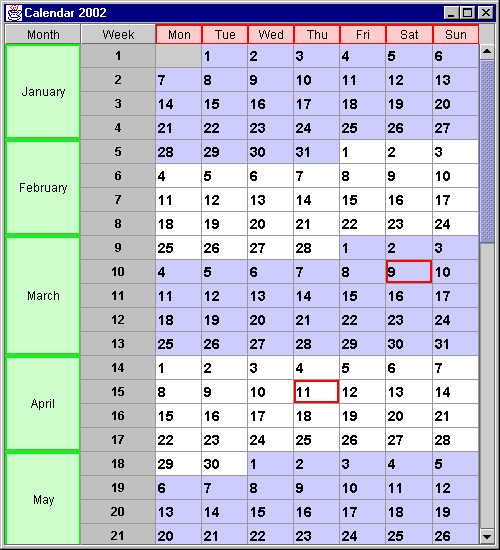 Each table cell in the days of the week columns represent one day broken up into one hour appointments from 0900 to 1800. The table cells that represent dates are colored blue and white in alternate months. Important dates are highlighted with a red border. The user clicks on a date to view and edit the appointments for that day. The width of the table is held constant by reducing the width of the other columns that represent days of the week. The following screenshot shows the appointments for the 6th of February. 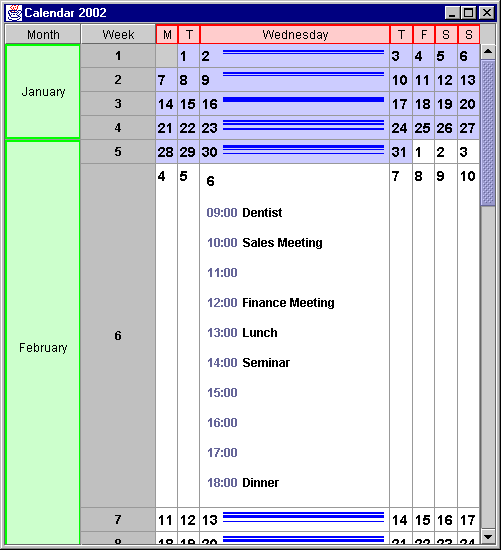 The Expanding Table renders a different presentation of a date depending on the current size of the cell. As the window containing the Expanding Calendar is resized, the cells are rendered to show the appropriate level of detail for their size. Each calendar table cell that represents a date is rendered by a ZoomingTableCellRenderer object that provides the three levels of detail shown in the following screenshots: small (a), medium (b), and large (c). The small level of detail, rendered by a DateCellRenderer object, shows only the date and is used when the width of the cell is less than 50 pixels.

The medium level of detail, rendered by a DateIconCellRenderer object, provides the date and a visualization of the entries for that date. To the right of the date is a rectangle that contains horizontal lines that indicate that appointments have been made in the time slots they represent. The thickness of the lines increases as the height of the cell increases. The medium level of detail is used when the width of the cell is between 50 and 120 pixels and the height is less than 120 pixels.

The large level of detail is rendered by an ExpandingComponentTableCellRenderer object that wraps a DayEntryPanel object that presents the text of the appointments. The ExpandingComponentTableCellRenderer scales the DayEntryPanel component to fit the size of the cell. The large representation is used when the width of the cell is more than 120 pixels and the height is more than 100 pixels.

The following diagram shows the classes and interfaces of the Expanding Calendar application. 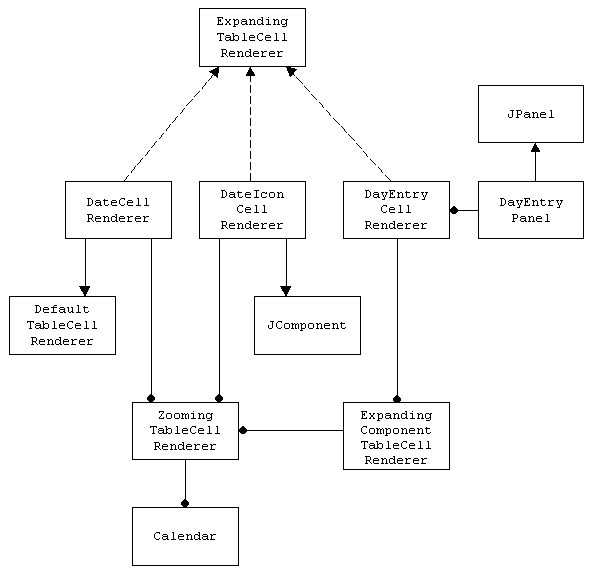