A Genetic Algorithm for Feature Labelling in Interactive Applications

This article describes an algorithm for labelling features in interactive applications such as data visualization. In the first phase, a genetic algorithm searches for a set of label positions that minimizes the number of labels that overlap features, other labels, or the bounding box of the region to be labelled. The genetic search has a time limit to ensure that interactive software that uses the algorithm is responsive. If there are any overlapping pixels after the genetic search, the second phase of the algorithm makes small adjustments to the position of the overlapping labels to remove the overlaps.

Imhof (1962) developed six general requirements for positioning labels that are often cited in the literature on feature labelling algorithms:

The algorithm described in this article is aimed at labelling features in interactive applications such as data visualization. Object labelling in interactive applications is often temporary; there is therefore less emphasis on aesthetics than for the permanent labels required for printed maps, for example. The most important requirements for this algorithm are therefore definite attachment and avoidance of overlaps.

The next section describes the labels that are positioned by this algorithm.

The current position of a label is described by the angle θ of rotation about the centre of a circle centered on the feature (below left). The radius of the circle is the length of the line that connects the corner of the bounding box of the label to the centre of the feature. Labels are positioned by moving the bounding box along the circumference in steps of φ degrees (below right). 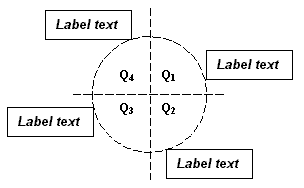 A labelling algorithm needs to position each label so that as few labels as possible overlap. There are three ways in which labels can overlap: labels can overlap the outside of the region bounding box (below left), features (below centre), and other labels (below right). Labels that overlap the bounding box of the region to be labelled are undesirable because the part of the label that is outside the bounding box will be clipped and not seen. Labels that overlap features or other labels are undesirable because they will obscure them.

The following illustration demonstrates the solution to the overlapping feature problem: the label is moved anti-clockwise along the circumference until it no longer overlaps the feature. 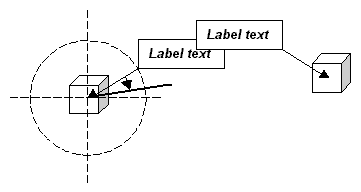 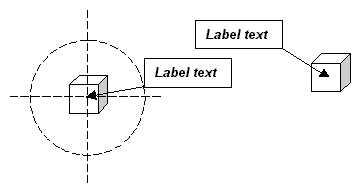 Overlapping labels can be corrected by jittering one or at most two labels until they no longer overlap. As the number of labels increases, the complexity of jittering rises exponentially. Jittering alone is an impractical method of positioning labels. For any non-trivial labelling task, there are simply too many labels to move. A solution to the overlapping labels problem that can deal with this complexity is required.

Genetic algorithms are particularly well suited for solving the overlapping pixels problem because they are function minimization optimizers that rapidly search the solution space in parallel.

Genetic algorithms (GAs) are a class of learning, search, and optimization algorithms based on the mechanisms of natural selection and natural genetics (Goldberg 1989).

A typical GA works as follows (based on the description by Forsythe and Rada (1986):

The next section describes the feature labelling GA.

The feature labelling algorithm has two phases: GA search followed by label jittering. In the first phase, the GA searches the solution space to find a set of label positions that minimizes the number of overlapping pixels. If there are any overlapping pixels, the second phase of the algorithm jitters the labels to correct the overlapping, as described in section 3.3.

The position of each label is represented by the angle θ of rotation about the centre of the circle, and is encoded as a binary string of six bits. The value of θ, that ranges from 0 to 359 degrees, is mapped onto a value in the range 0 to 63. This enables θ to be represented in six bits: 26 = 64. Representing θ in six bits reduces the length of each chromosome – 0 to 359 would take nine bits to represent.

Six degrees is a useful increment. If the value of θ is too small, the increments in θ will not move the label along the circumference far enough; the next position will be too similar to the previous position and too little progress towards a solution will be made. Similarly, if the increments in θ are too large, the number of positions will be insufficient to enable the labels to be positioned to avoid overlapping. 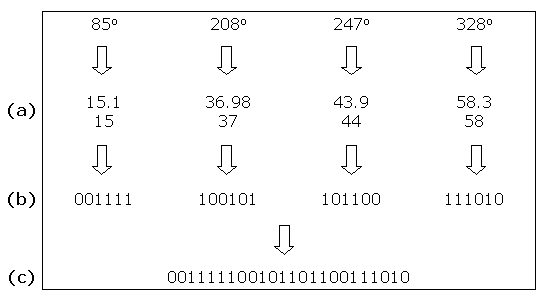 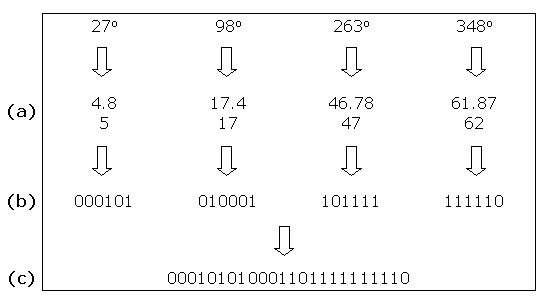 Crossover is applied to every pair of parent individuals because a suitable solution has not yet been found; if one had been found, the algorithm would have terminated. 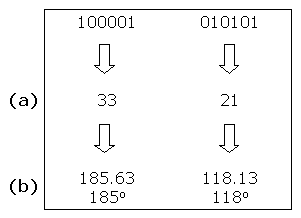 The GA is run each time a new set of label positions is required. The first step is to create an initial population made up of individuals that represent a set of random label positions. The GA creates new generations of label positions until either the allowed time elapses, or the number of overlapping pixels is minimized, ideally to zero.

Responsiveness is important because labelling is often invoked by a user command, such as a pull-down menu option in an interactive system. Responsiveness is vital when the labelling command is issued in the context of a series of selection and data labelling operations as part of a data exploration session.

A consistent and predictable response time is required to make an interactive system feel responsive. Shneiderman (1998) recommends that common tasks should take no more than two to four seconds. If this labelling algorithm is used in the context of a series of selection and data labelling operations, then the maximum time allowed for the GA search should be less than four seconds.

The following screenshots illustrate the label positions for a set of features produced by this algorithm. The features are towns and cities in a visualization application. In this example, the features are tightly packed and provide a good test of the algorithm’s ability to avoid overlaps.

Since the initial placement of the labels – the angle of rotation around the centre of the circle – is random, a different set of label positions will be produced each time the algorithm is run on the same set of features.