One of the types of information that the Document and Code Knowledge Elicitation Toolset (DOCKET) project needs to capture are the hierarchies that exist in systems. This article describes the hierarchy editor tool developed to input hierarchical information into DOCKET.

DOCKET is a four year project that will produce a reverse engineering toolset for making system maintenance more effective. Existing reverse engineering tools examine only the syntactic aspects of a system such as source code. The DOCKET tools will examine both the semantic and the syntactic aspects of a system and take information from higher level knowledge sources such as existing users and documentation, as well as source code.

Knowledge from these external forms will be processed from their raw formats into machine readable forms using input tools. This machine readable form will be analyzed by the DOCKET tools to form a structured representation of the knowledge collected about a system from each of the three sources. One type of information that DOCKET tools need to capture is the hierarchical relationships that occur in a system.

A hierarchy models information as a set of parent nodes that are connected by links to child nodes. Nodes store information specific to the type of information modelled by the hierarchy. Many different types of hierarchy need to be modelled, such as system functions, user goals, and agent/task hierarchies. The following hierarchy is a functional decomposition hierarchy from an analysis of the Halls And Residences Information System (HARRIS). This is a typical example of the type of hierarchical structure that needs to be captured by DOCKET. Each parent node represents a task that is composed of the sub-tasks represented by its child nodes.

The mandatory link constraint ensures that at least one instance of each mandatory link must be connected to the from node of the link being validated.

The next section describes the hierarchy type definition system that enables users to edit different types of hierarchies.

Every hierarchy has the same underlying structure: nodes connected by links that conform to a set of constraints. Consider the organisation of staff in a university department. A hierarchy type definition for a hierarchy to model this organisation might contain the nodes, links, and link constraints, such as:

A member of staff can: 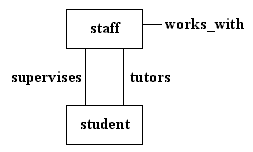 The supervises and tutors link types connect staff and student nodes. A link that connects nodes of the same type, called a self link, is denoted by a short line next to the node with the name of the link at the end. In the example above, the self link works_with connects a staff node to another staff node.

The next section describes the user interface of the hierarchy editor tool.

The following screenshot shows the user interface of the hierarchy editor tool. The majority of the interface is taken up with the hierarchy display and editing area. Operations for loading and saving hierarchies, configuring the editor with a hierarchy type definition, etc. are accessed from pull down menus at the top of the window. Short cuts to the most common operations, adding nodes and links, are provided by the buttons to the left of the drawing area. The top button adds a new node to the hierarchy and the bottom button adds a new link. 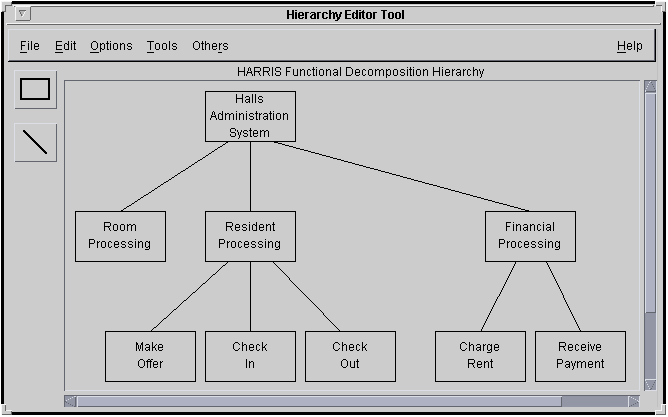 To add a node, the user presses the Add New Node button and a dialog box is displayed that enables the user to select from a list of the available node types. When the user is designing a hierarchy type definition, this dialog is not displayed because the base type box is the only node type available. After a node type has been selected, the cursor changes to crosshairs to enable the user to position the node in the drawing area. Clicking the mouse button adds the node. The name of the type is displayed in the top left hand corner in lower case and the name of the instance is displayed in the lower half of the node in upper case. In the following new instance of a staff node, the name of the instance is UNDEFINED, which is the default name for all new node instances.

To add a link, the user first selects the from and to nodes by clicking on them. The from node is selected first, followed by the to node. When two nodes have been selected, the user clicks on the Add New Link button and a dialog box is displayed that enables the user to select from a list of the available link types. When the user is designing a hierarchy type definition, this dialog is not displayed because the base type link is the only link type available. An option is available for validating links when they are added which, if selected, does not allow links to be added that invalidate their constraints. A facility is also provided to validate a hierarchy which involves checking the constraint of each link in the model. Constraints can be added to a link via an option in the Tools menu. A dialog box is displayed that enables the type of constraint to be specified along with its parameters, such as minimum and maximum in the case of a mandatory constraint.

Nodes can be repositioned by dragging them around the drawing area. If a child node is dragged above its parent node, the link is displayed as shown in (a) below. The start and end points are not reversed to the bottom of the child node and the top of the parent node as shown in (b) because that would change the semantics and may also invalidate a link constraint.

The following diagram illustrates the architecture of the hierarchy editor tool. The user interface is implemented with the OSF/Motif user interface toolkit. The hierarchies are drawn with the X-Lib graphics routines using graphical and semantic hierarchy information. The graphical information describes the co-ordinates of the nodes and links on the screen and is stored in a separate data file for each hierarchy. 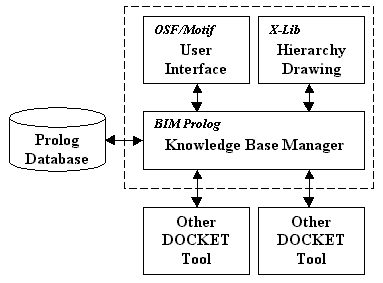 Node instances are stored in a node_instance predicate:

Link instances are stored in a link_instance predicate:

Node types are stored in a node_type predicate:

Link types are stored in a link_type predicate:

are converted into the following node types

is converted into the following link type