The goal of an information retrieval (IR) system is to maximize the number of relevant documents returned for each query. The results returned by keyword IR systems often contain a proportion of irrelevant documents because matching keywords is imprecise. The imprecision is caused by two characteristics of natural language: words can have different meanings when used in different contexts, and a single idea can often be expressed by several different words or synonyms.

2. The Imprecision of Keyword Matching Algorithms

The matching algorithms used by keyword IR systems are imprecise and retrieve irrelevant as well as relevant results. Two causes of this imprecision are terminology and semantics, both aspects of natural language. Terminology affects retrieval because different people use different words for the same concept (Furnas et al. 1987). Terminology is often cultural; a pavement in the UK is a sidewalk in the US, for example.

Semantics affects retrieval because the text of a document may not contain the exact keywords in the query but may nevertheless be about the topic of interest. This problem is exacerbated by polysemy. Polysemous words have different meanings in different contexts. For example, Java can refer to the Island in Indonesia, a type of coffee, coffee itself, or the object-oriented programming language. Matching a word does not identify the context in which it is used.

The polysemous meanings, or senses, of words can lead to keyword queries that are ambiguous. IR systems are unable to differentiate between the different senses of a keyword and retrieve documents that contain all the senses. Although the results are what the user asked for in the query, the results are often not what the user intended. A proportion of the results will be irrelevant to the intended sense and users must expend effort evaluating the results for relevance.

The next section describes how identifying the intended meaning of keywords can improve the precision of IR systems.

The ambiguity inherent in matching keywords can be eliminated by identifying the meaning that a document or query author intended when they used a keyword. In this article, a concept is a disambiguated keyword, i.e. a keyword for which the intended meaning has been identified.

Queries contain a small number of keywords, some of which might have more than one meaning. It is relatively straightforward to present the user with a list of possible meanings for an ambiguous keyword and ask him or her to select which meaning was intended. This choice should be optional to reduce the burden on the user, but the effort will be rewarded by more accurate results. Identifying the concepts present in the documents in a collection must obviously be automated.

To be able to identify the concepts in a document collection, and to be able to present users with a choice of possible meanings for a keyword, a concept IR system must have knowledge of those possible meanings. One such repository of word meanings is a lexicographic database. The examples in this article use WordNet, an on-line lexical reference system developed by lexicographers (Miller et al. 1993, Fellbaum 1998). WordNet organises English nouns, verbs, and adjectives into synonym sets that represent one underlying lexical concept. This article only considers nouns for simplicity.

WordNet enables the senses of a keyword to be disambiguated. For example, WordNet defines three senses of the (noun) keyword Java:

The definition of a concept used in this article is a keyword and the number of the WordNet sense that identifies its meaning. For example, java/1 represents the first sense, an island is Indonesia.

WordNet also provides access to the concept trees that describe the relationships between concepts in the database. In this article, two concepts, A and B, are connected by five relations: 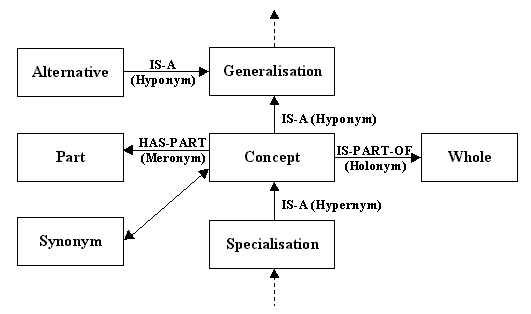 The alternatives of a concept are those concepts that have the same generalization as the concept, i.e. the siblings of the concept in the tree. Alternatives are reached with the hyponym relation.

The following diagram shows the partial concept tree of the first sense of Java, the island in Indonesia. This is a partial concept tree because it only shows a small number of the potentially huge number of concepts that can be reached with the five relations. Two levels of generalization are shown: Java is an island and an island is a type of land. There are no specializations of this sense of Java. Three example alternatives are the concepts Bermuda, Ceylon, and Singapore that have the same generalization as Java, Island. 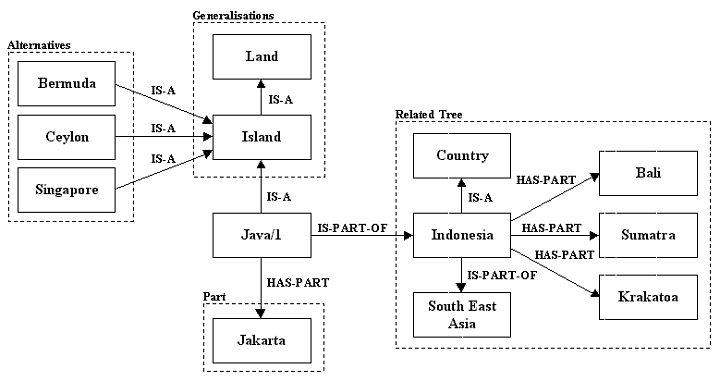 WordNet stores a single part of this sense of Java, the concept that represents its capital city, Jakarta. The diagram above also shows the concept tree of the related concept Indonesia. Indonesia is a country that is part of South East Asia and is made up of several parts that include Bali, Sumatra, and Krakatoa, as well as Java.

The following diagram shows the partial concept tree of the second sense of Java, the beverage. Two generalizations are shown: coffee is a type of beverage and beverage is a type of food. Three specializations of coffee are shown: espresso, cappuccino, and decaf are types of coffee. Three example alternatives are shown: hot chocolate, soft drink, and tea share the same generalization as Java, beverage. Coffee is made of two substances, coffee beans and caffeine. 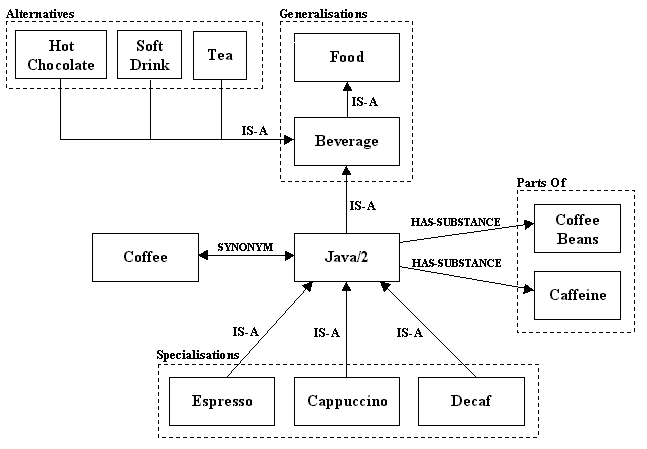 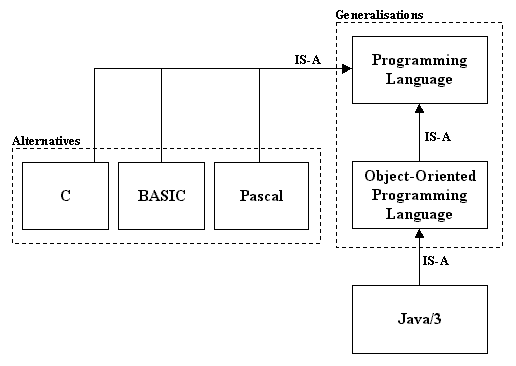 The next section describes how the information stored in concept trees can improve the performance of keyword IR systems by making keyword queries more specific.

To satisfy the (K1 ∧ K2) part we intersect the K1 and K2 lists, to satisfy the (K3 ∧ ¬ K4) part we subtract the K4 list from the K3 list. The ∨ is satisfied by taking the union of the two sets of documents. The result is the set {D1, D2, D3} which satisfies the query.

Although Boolean queries are powerful, they are difficult to write when more than a few logical connectives are involved (Green 1990). Boolean queries can be used more effectively if they are generated automatically by an IR system to represent concepts chosen by the user. The concept browsing user interface described in section 6 in one method of selecting concepts.

is expanded to incorporate the synonyms Si of K:

Adding the synonyms helps to overcome the problem of different words being used for the same concept. Automatic methods of choosing synonyms are required because users find it difficult to come up with alternative search terms (Ruge 1995).

Query expansion techniques can be enhanced with concepts to make the expanded queries more specific. Once the keywords in a query have been disambiguated into concepts, the keywords relating to the generalizations, specializations, and the parts of the concepts can be added to the query.

For example, the simple query

The concepts in a document are identified by first extracting the keywords and removing the duplicates and stop words. Each keyword is then added to a list of concepts. A keyword with more than one sense must be disambiguated before being added to the list of concepts. Five tests are performed to identify which sense of a keyword is present in a document. A point is awarded if any of the following conditions are met:

The application of each test produces a matching score that indicates the algorithm’s level of confidence that the concept is present in the document. Tied scores can be presented to a domain expert for final classification. Each concept (Ci) is stored in an index and points to a list of the documents that contain the concept. For example:

The list of documents for each concept in the index is augmented with the score Mi of matching concept C with document Di:

The same Boolean operations can be applied to an index of concepts as for an index of keywords.

The second stage of the concept IR model is to identify the concepts in a query. This must be performed each time a query is issued.

Typical keyword queries do not contain enough keywords to enable the algorithm described in the previous section to identify the concepts in a query. The most accurate method of identifying the concepts in a query is to harness the users’ language skills by asking them which senses of the query keywords were intended. The user interface of the search engine described in section 6 shows how the senses of a keyword can be disambiguated.

The concept IR model is more flexible than the strict matching performed by the Boolean keyword model. The Boolean model partitions documents into two sets: those documents that contain the query keywords and those that do not. This strict partitioning does not fit well with natural language. The vector space model (Salton 1971) and rough sets (Srinivasan 1991) were developed to retrieve documents that partially match a query. The concept IR model enables documents to be retrieved that match queries in varying degrees.

Five matching rules—based on the relations described in section 3—are used to generate a matching score. The base rule is that the same sense of a keyword always matches itself.

Synonyms of the same sense of a keyword always match. 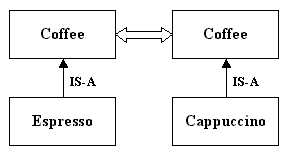 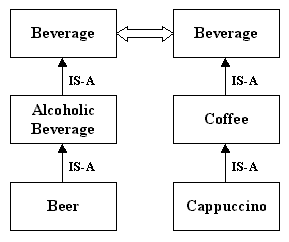 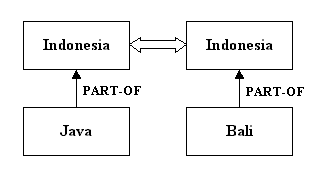 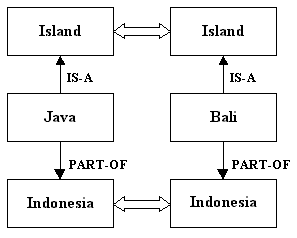 Two concepts, A and B, are matched in the following order:

The relation that matches two concepts determines the matching score. For example, the meronym relation is stronger than the hyponym relation. Concepts that are part of a whole are more closely related that generalizations of those parts. Java is more closely related to Bali than to Australia, for example, because Java and Bali are part of Indonesia, even though they are all islands. 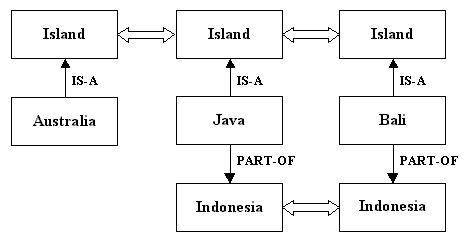 Matching scores are weighted by the relation used to match the concepts. The relations have different weights and are weighted in the following order, from highest to lowest:

6. A User Interface for a Concept IR System

This section describes a prototype user interface for a web search engine based on a concept IR system. The user inputs a query and the search engine presents all the senses of the keywords in the query and enables the user to select the intended sense.

The following screenshot shows that the results of the single keyword query, Java, contain documents about all three senses of Java. The three senses are listed above the results. A link to the sense is presented next to an explanation of the sense. Clicking on a sense issues a new query that will retrieve the documents only for that sense. 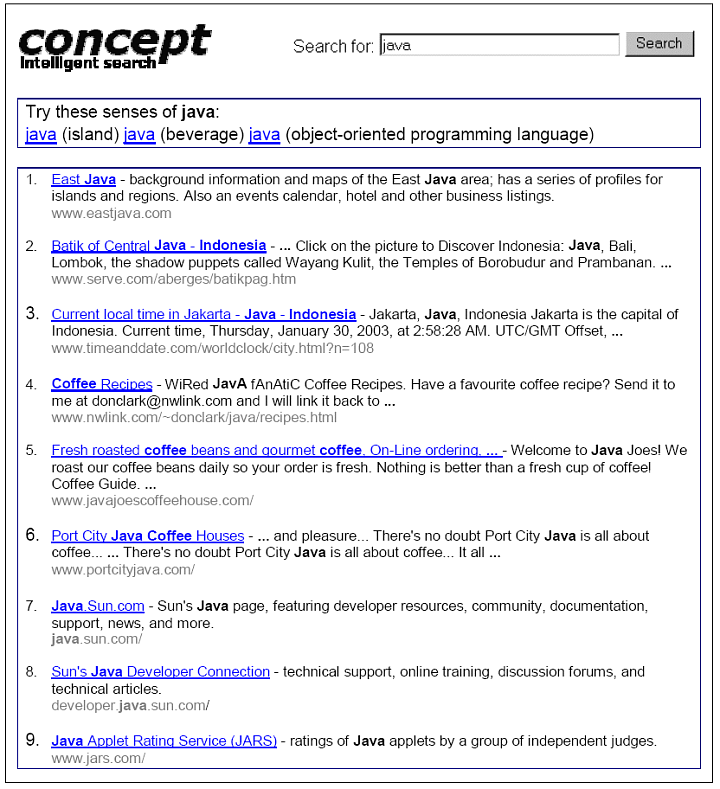 The next screenshot shows the results of clicking on the first sense of Java, the island in Indonesia. 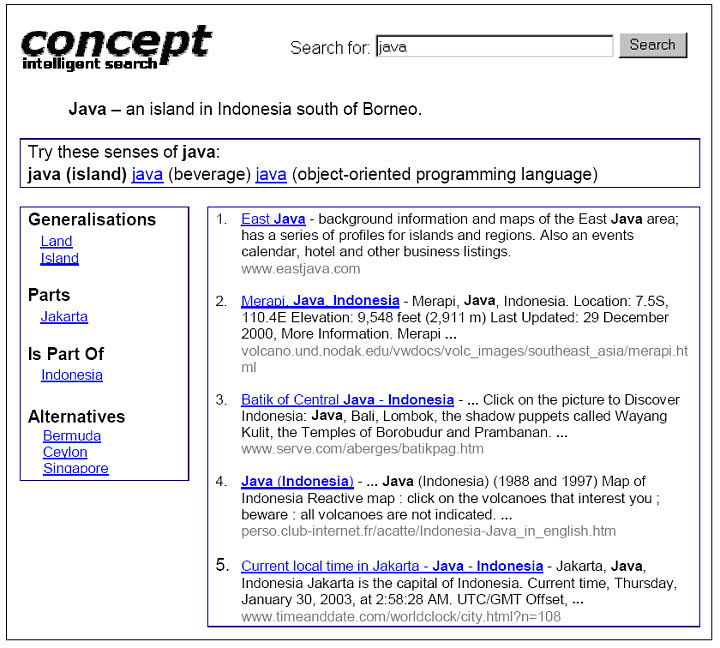 The following screenshot presents the results of clicking on the second sense of Java, the beverage. 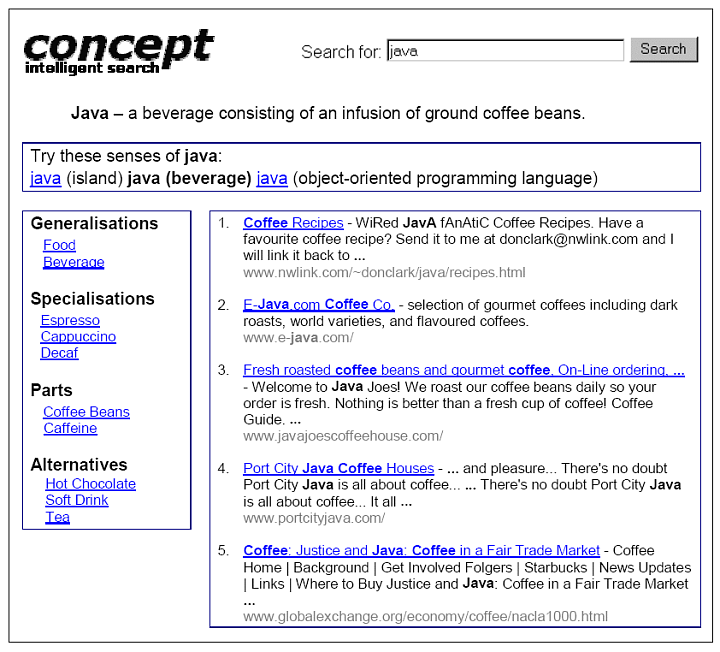 The following screenshot the results of clicking on the third sense of Java, the object-oriented programming language. 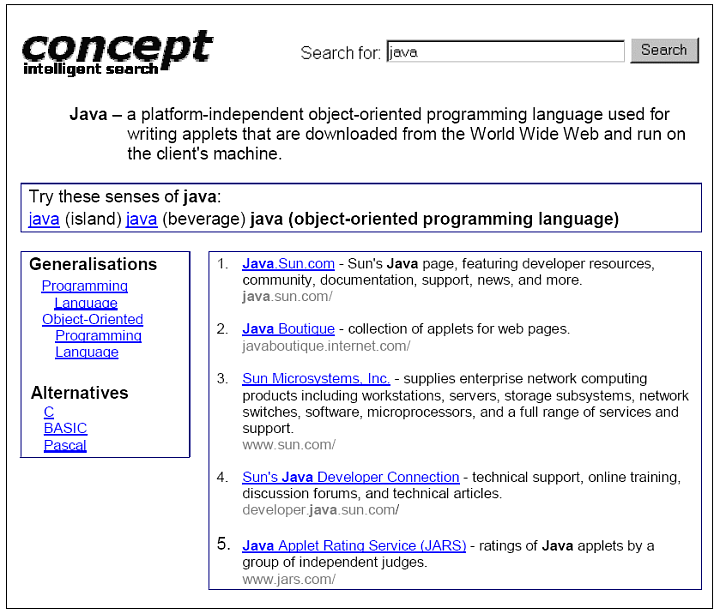 Users are able to navigate and search with the concept hierarchy with a point and click interface. The concept hierarchy is shown on the left hand side of of the above screenshots. Users can choose the other senses of the keyword java, the generalizations, the parts, and the whole of which it is a part.